For other topics related to the FreeBASIC project or its community.
Post Reply
24 posts

the new and the best rad-ide for freebasic
see: http://rqwork.de/forum/Upload/index.php

PLEASE BOOK UP, the forum was drawn to be cracked, so a new installation was needed and secure it very well now ... sorry for any inconvenience ...
Last edited by nastasa eodor on Jul 28, 2020 6:42, edited 1 time in total.
Top

I found NOTHING about an IDE.
No statements, goals, hopes, aspirations...
The immense complex Bulletin Board with one member and no community discussion baffles my exiguous comprehension.
However, as some have stated previously, "I shall return".
It may require a few moments.
Top

What is the purpose of your post, nastasa: ridicule an empty forum?
Top

jj2007 wrote:What is the purpose of your post, nastasa: ridicule an empty forum?

A forum for his FreeBASIC IDE he already advertised on this forum.

I think the guy is very poor at marketing job. Both of time, he only caused confusions and failed miserably.
Top

New rad-ide for FreeBasic, including windows gui wrapper.
Is pre alpha version and his purpose is for testing.
license: FREEWARE
http://rqwork.de/zips/kogaion.zip
or
http://www.rqwork.de
Last edited by nastasa eodor on Jul 31, 2020 4:46, edited 4 times in total.
Top

jj2007 wrote:FIVE posts advertising the same thing - do you find it funny to spam the forum?

Besides, it doesn't even work: "The code execution cannot proceed because rtl70.bpl was not found"

Re: new rad-ide for FreeBasic, object oriented one

I get compiler not found, although I put the path in the .ini file.
None of the classes are registered.
But I got the editor up OK.
Early days of course.
Thank you for effort, I am sure you will get it fully functional in due course.
Top

Re: new rad-ide for FreeBasic, object oriented one

dodicat wrote:I get compiler not found, although I put the path in the .ini file.
None of the classes are registered.
But I got the editor up OK.
Early days of course.
Thank you for effort, I am sure you will get it fully functional in due course.

you can set it in "settings"...also you can add classes via "addclass" or put then in the ini file like : your palette name=class1,class2,...of course according with gui wrapper classes, exist an automathic mechanism to read classes from wrapper, but for now is deactivated

Now it works, but it looks utterly confused. What exactly is the advantage of using this "IDE"?
Top

jj2007 wrote:Now it works, but it looks utterly confused. What exactly is the advantage of using this "IDE"?

dm...if you ,like use it, if dont, dont...the advantage is you could extend his wrapper at infinite, and use new classes in wysight mode...dm...men. Try to build new class and add to the ide via add new class...you will see what is the major advantage, and many more...find by your self
Top

Hello Vasil...i apologize if I annoying you ...no joke really.
I download your zip guiWork and forund TRichEdit and unzip and run exe..
well syntax coloring work...
why i asking ..i already have one small editor with richEdit control so i like to ask you is this
all code you use for syntax coloring of keywords:

Quickly started it up and played around a bit and soon ran into Access Violation errors when creating / deleting controls in the designer. Evidently it is still in pre-alpha state :-) 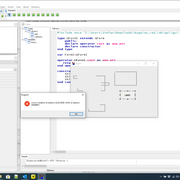 The concept looks similar to existing Delphi designers, just in a very early stage. I'm sceptic about the organizational setup of the project, though. Single developer and closed source sounds like doomed to fail. At least that's what we've seen with a dozen of other new IDE announcements that popped up (and vanished soon) here on the forums in recent months and years. Paul's WinFBE and Kuan's poseidonFB probably are the most promosing ones on a long-term perspective, although they come without a lot of bells and whistles and improve slowly, but steadily.
But back to this IDE: as mentioned already the concept (as far as one can see in the current state, not sure about your plans) of having some UI abstraction framework tied to an IDE with a graphical designer is definitely not new, but a well-proven one. Let's hope all the best for its future.
Top

Users browsing this forum: No registered users and 3 guests