I'm not sure how much appetite there is for this to be completely built in, (to read the debug info that has line and function info you need to cart around a separate program or a dll on Windows) but I've made a start on a lib to translate stack traces to symbols.

I can get the line and file info from dwarf and stabs debug info (the two fbc can produce) on Windows, now I've got to see how fancy the combination of backtrace and dladdr is on Linux and/or backtrace_symbols since it looks like a magic wand.

Then maybe there could be a way to only get a stacktrace for Error built-in, which would be far less hassle
Top

As usual, I did all the work for this assuming the basic lynchpin on Windows (CaptureStackBackTrace) would just work without checking it first. And it turns out, FB must do weird things to the stack that it doesn't like. Because it doesn't

Produces this output, which is perfect

StackWalk64 is a little better

But still, only 1 & 4 out of those are code addresses, when there should be at least 5/6
Top

Turns out backtrace is similarly bad for FB :-(

@adeyblue
Maybe I can help you : fbdebugger has its own 'stackwalk' for retrieving at any moment all the called procedures. However you need to use gas64 on 64bit OS.

The principle should also work with gas32 as prologue/epilogue are the same (push [r/e]bp -mov [r/e]bp,[r/e]sp).
Top

Thanks, I tried finding it in your debugger code but couldn't.

I found out why they're so broken. It seems these functions lean on the unwind tables quite heavily to get it right, but FBC is hardcoded to turn them off, even for debug builds

If you compile with
-Wc -funwind-tables
then

They work fine. Gas needs special directives in the asm to generate them.

Also my FBC is upto date with master, but this works fine with -gen gcc but crashes after printing "Before context" with -gen gas64

adeyblue wrote:I tried finding it in your debugger code but couldn't.

proc(j).db And proc(j).fn contains first/last addresses of every procedure. They are retrieved in debug (stabs) data.
At the end of this code (after wend) pridx() contains a list of the running procedure indexes. The rest of the procedure (not attached) looks for procedures already running.
Made for each thread.

It's a relatively easy way. If you need more information no problem. Linux and Windows compatible, readprocessmemory is a generic function.

Thanks. I've written about three different stack walks methods now since they all go about halfway to covering all the circumstances.

Frame chain walking won't go through gen gcc code by default or the system libraries on Lin or Win on X64 because they don't use rbp for that.
While the OS stack walk methods don't need rbp but need tables FB won't generate by default to navigate through FB code.

You can generate those tables at runtime using the debug symbols, but if you do, neither basic OS method will then use them, which seems a bit pointless
And any sort of manual scan has the obvious problems

So I gave up and put it onto the user to decide whether they want to use system method or rbp chain + a manual scan method.
https://github.com/adeyblue/FBStackTrace

It says Linux but I've only used it on Ubuntu 20.04 64-bit. I have no interest in setting up a bunch of different distros to see which others it may or may not work with. It definitely won't build for ARM as-is without a few things being written by someone who knows them, nor on any architecture where the stack grows upward, which the pthread man pages assure me exist.
Top

@adeyblue,
I didn't look at all the files however very impressive.

One thing you should check (if not already done) : when using -gen gas64/-g and several object files (.o) the linker regroups the different .dbgstr sections in one but all the offsets in .dbgdat are not changed.

In fbdebugger a variable stores the max value for the offset and it uses it when a stab code 0 (zero) is found for defining the real new offset value.
Top

Thank you, I fixed it. I also made it build with gas64 because...
I've made gas64 output the required asm statements to generate the unwind table.

I put the changed file up here:
https://www.airesoft.co.uk/files/temp/ir-gas64.bas

The lines I added are the
cfi_ asm_code
and
cfi_windows_asm_code
ones

It works fine on Windows with the changes, but I don't have a setup to build fbc on Linux so I don't know if it still requires a linker argument or not.
Top

The other day I posted this here: Can somebody explain in a few words what a stack walker does, and what we can expect from it, in terms of simplifying the debugging of an application?

It turned out that it was actually not a big deal to write a StackWalker macro in Assembly (sorry, I know this is a FB forum, but I guess it could be interesting also in FB). When a crash happens, a console window opens and displays this kind of info:

Is that more or less what "stack tracing" means, or do I miss something?
Top

What this does is this 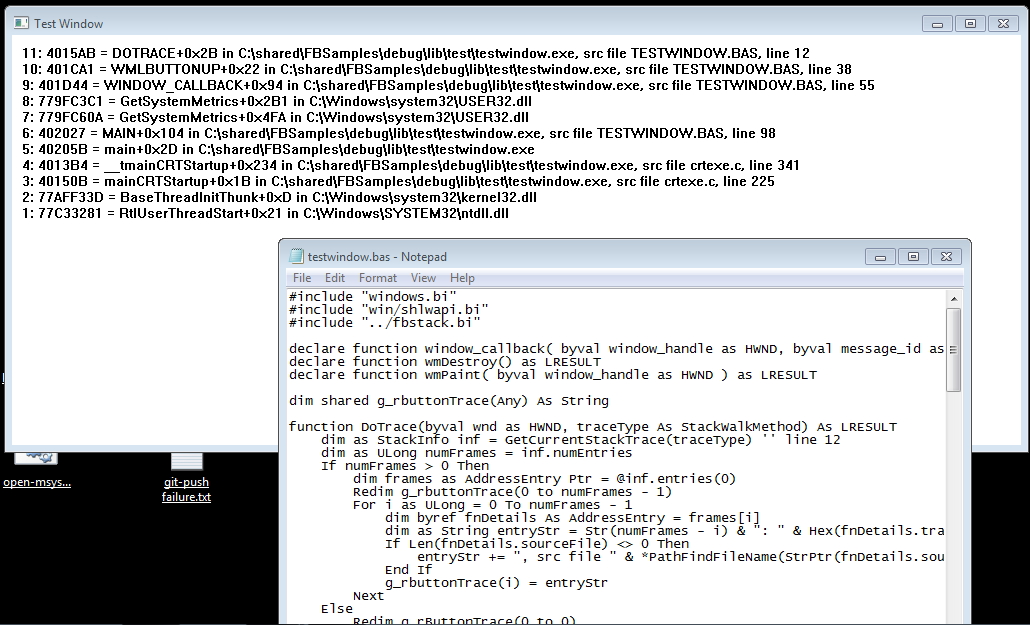 i.e. from any point in your program, you can call a function and it will tell you the sequence of calls the thread took to get there, turning the raw code addresses into function names, source files and line numbers.

The only reason this is relatively so much code is that:
* FB can produce the function/file/line information in three different ways, none of which have built-in ways to use/extract it on any platform,
* FB doesn't by default produce any of the things needed to get the addresses in the first place. And its two 64-bit generators require two different methods of getting them
* and I wanted to make it work for 'all' types of exes wherever they came from, not just those created by FB
i.e. if you have the Microsoft symbols, it'll correctly translate address in Microsoft code to function names too (see the user32 entries have changed from the nearest exported function (GetSystemMetrics), to their actual function names) 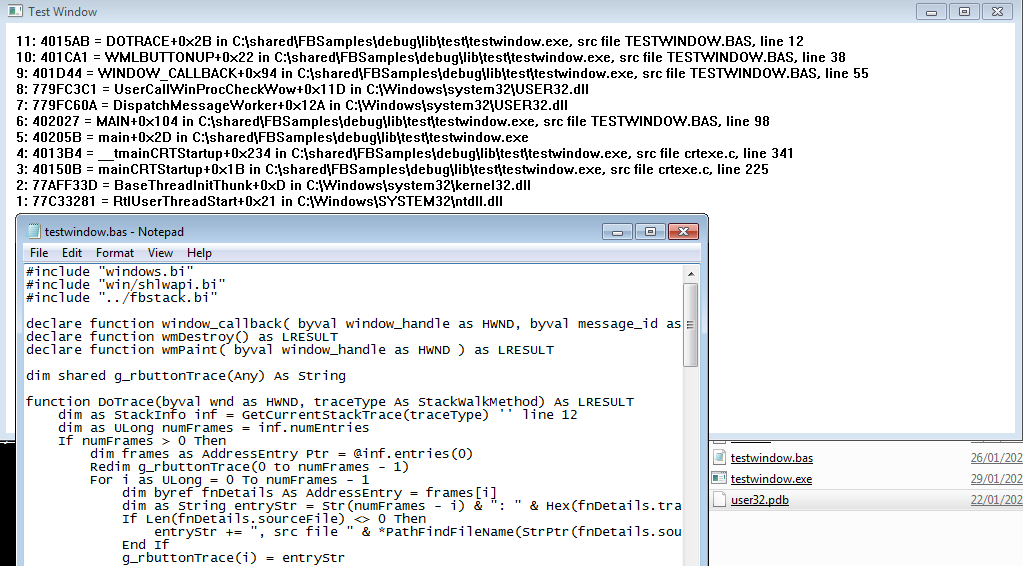 If it was Windows only, with code built with Microsoft tools, you'd use the tools' flag to generate a PDB file and then this library would be reduced to nothing more than:

I've since sent changes to the FB compiler to generate the needed info to do it the easy way on both its 64-bit generators. If those are all added in, half of this code could be thrown away in future as the easy way will just work.
Top

adeyblue wrote:It works fine on Windows with the changes, but I don't have a setup to build fbc on Linux so I don't know if it still requires a linker argument or not.

Do you want that I do something ?
Compiling fbc with your changes on Linux and generating some exes (gcc/gas64) with debug data ?
Just upload the modified fbc.bas source as you did for ir-gas64.

Maybe, to avoid useless added data to exes, you could add stackwalker data only when users use -g.
Top

If this is officially added to the FB compiler, will it be thoroughly documented?
Top

What more do you need to know? It only has four public functions and two of those are just convenience which call the others for you. The readme describes them all in the API section. I don't think you really need half a page each to say 'this function gets a stack trace' or 'this functions takes an address and returns the function name, source file and line number of that address''?

Besides, there's literaly zero chance of adding a thing that'll enlarge your exe by 600K (linux, libdwarf is *big*) or that requires an extenal dll (Windows). The stack tracing bit alone maybe since that has no depedencies, but if all the patches to generate the required data are added, it's not even necessary as the OS functions for traces will just work then.
Parsing stabs data doesn't have dependencies either, but stabs isn't default for gen gcc. Stabs is default for gas64 but without the patch above, getting the traces with gas64 isn't accurate in the presence of non-gas64 compiled code.

Basically through whatever history and means the FBC defaults were arrived at, when it comes to stack traces and symbols, it's a total mess and they're basically the worst of all worlds. It's amazing we have this many code generators, but that they couldn't converge on one debug format to be THE FB debug format (as opposed to three incompatible ones) is technically horrfic.

idk, everytime I want to do something with this language, it seems to be set up in just a way to make doing that thing as hard as it can possibly be...


Maybe, to avoid useless added data to exes, you could add stackwalker data only when users use -g.

...And then everybody is resistant to change because 80k is too much for this scary new thing they've never heard of.

Post mortem debugging is useless? Being able to use OS provided tools to instrument your app is useless? Literally every tool that may use stack traces as part of its job is useless? All of them will use the OS provided means to get one, and that's not rbp walking, which means they are all impossble to use with gas64 in its current state. If anything adding it to non-debug programs is even more important.

I don't claim it's the most important decision to ever be made, but to exclude all those potential extra uses because you're scared of an extra 80k per 2MB seems not a good tradeoff.
Top
Post Reply
22 posts