The cPaths window, on Windows 10, is not wide enough to accommodate a title and a minimize button and so on.

I have two monitors - I could be coding on one monitor and checking out an API at MSDN on another.

Anyway, why don't you just close cPaths? You can always open it again - there is no information to lose and it opens quickly.

I could add a function to toggle between topmost and not topmost - would that be any good?

Why do you have cPaths positioned so high? It gets in the way of the Find window.

Well, as I said, the best option would be to have it integrated into WinFBE. If not then the minimize icon in the windows title would be enough to minimize the window when not needed as the fastest solution. Optional a toggle option for topmost attribute would be nice, too.
The position of Cpaths was just to take a screenshot.
Maybe you can set the Cpaths window as a child of WinFBE GUI if it makes sense...
Top

Richt click on cPaths' title bar - there is a 'minimise' there - I had forgotten that.
Top

I wasn't going to do this but changed my mind.

How does this look on your 4K monitor? I am a bit concerned about the toggle bitmap.

The following actually unzips to SetCompilerPathsII.exe. Make a copy of your existing exe.

@Δρ: Thanks for you update.

What about the idea to create the GUI as a child GUI in WinFBE? The GUI will stay on top of WinFBE GUI and will minimize automatically when WinFBE minimizes. 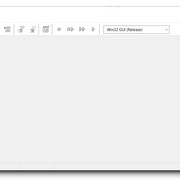 Finish it using a cpath.ini.

Finish it using a cpath.ini.

Well, my first idea was that Paul integrates your idea, which is great, to WinFBE directly by adding a 2nd combobox. My idea is only a workaround.

Maybe there is a way to hook to ToolbarWindow32 control from WinFBE and inject a second combobox from outside...

Btw, my exit code doesn't work properly. When WinFBE closes then the additional GUI should exit, too but it works sometimes only. How did you do the check to close Cpath when WinFBE closes?
Top

UEZ wrote:How did you do the check to close Cpath when WinFBE closes?

Nothing clever - it is blinding simple. Using a timer was my idea and FindWindow was by José - my approach was a bit of a 'dog's dinner'.

UEZ wrote:How did you do the check to close Cpath when WinFBE closes?

Nothing clever - it is blinding simple. Using a timer was my idea and FindWindow was by José - my approach was a bit of a 'dog's dinner'.

I agree with your idea of adding a 2nd combobox by Paul. However, he is currently concerned with fixing editor issues and further developing the designer. He may well take my view that few want more than one tool chain and Paul Doe, perhaps others, have problems with any later than gcc 5.2 - although I don't.

I thought that I was 'over the top' with my collection of tool chains but I see that you have gcc 10 and 11. I am sure that some members think us 'barking mad' but I think they are missing out - 8.3 is a 'cracker'. 8.3 and 9.2 are at Paul's GitHub pages but have not been mentioned since WinFBE V 1.9.4, and he is no rush to push them again.

A combobox with user switches would also be good. I would like to see both my SetCompiler* made redundant - maybe one day.
Top

deltarho[1859] wrote:@PaulSquires
How does this look on your 4K monitor? I am a bit concerned about the toggle bitmap.

@deltarho[1859]
I have attached a screen shot. As you can see, the bitmap does not scale well and the background is not transparent. You might want to take Jose's advice and use his CXpButton class button with a transparent PNG image.

Paul wrote:, the bitmap does not scale well and the background is not transparent.

I figured as much.

It is probably a good idea to get into CXpButton in any event but not for the sake of a single button especially since I did not really buy into it's need. If another application opened on top of WinFBE and my SetCompiler* got in the way I would simply close them - it is the fastest remedy.

So, an interesting exercise but I shall not be pursuing the TopMost toggle any further. You may like to to put it into a bucket of water - it was designed to self-destruct in 24 hours - it needed further work as I had not looked at the larger forms via the 'L' filename appending.

I was able to inject a combobox to the ToolbarWindow32 control. :-) 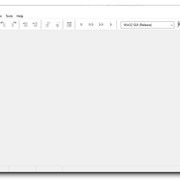 Here the code I used so far:

My quick initial thoughts on this (multiple toolchains).... As was surmised in an earlier post, I don't know how much interest there is for such a thing. I imagine that most people want to simply use FB out of the box as per the official releases. Of course, that's just my initial thoughts and I could be totally wrong. If the ability to easily add additional toolchains existed, then maybe such sentiment to use alternate toolchains would quickly change. Maybe a chicken/egg type of problem.

I have looked at this topic before and, for me, it comes down to how to best incorporate this functionality into the editor without it being too overwhelming for the user - especially a new user.

My thoughts on how to incorporate into the editor gui:

Have the current toolchain display in a panel in the bottom statusbar. Probably in the panel to the right of the file encoding panel. If the user clicks on that panel, then a popup menu will display showing all of the available toolchains (with a checkmark next to the currently selected one) along with an option to "add/edit toolchains" or maybe simply "configure toolchains". This way you could quickly toggle amongst toolchains and then only display a popup configuration dialog should that option be selected (with the benefit of hiding away all the clutter of the add, edit, delete of toolchains until it is specifically needed). The toolchain configuration dialog would also be accessible under the "Options" menu, immediately below the "Build Configurations..." menu option. I am not a fan of an additional combobox on the toolbar. The toolbar is already too wide and users with smaller monitors and displays would not benefit. Likewise, I am not a fan of an additional toolbar within the rebar, hence the reason I am talking about a statusbar panel approach.

What are your thoughts on this type of approach?
Top

For me it makes sense to have a fast access to different toolchains to make some test regarding speed and I like the idea to have this feature integrated into WinFBE. It's a pain in the a$$ to hook to WinFBE to add a combobox or whatever. I stumble from one problem to the next. :-(

PaulSquires wrote:My thoughts on how to incorporate into the editor gui:

Off topic: if you can add a highlighter of current word thru the whole code to see where the word is used (maybe I've asked it already). ^^
Top

UEZ wrote:Off topic: if you can add a highlighter of current word thru the whole code to see where the word is used (maybe I've asked it already). ^^

No problem. I have now added this feature. It is a feature that is present in editors like Visual Studio Code. As you move from word to word in the editor, matching words in the editor are highlighted. I believe that editor calls it "Occurrences Highlighting" so that is the terminology I used for the new feature.
Top
Post Reply
46 posts

Users browsing this forum: No registered users and 3 guests