User projects written in or related to FreeBASIC.
Post Reply
9 posts • Page 1 of 1

This is a "header only" implementation, of the four mostly used commands in "serial-communication".
(like Arduino or any other, serial controllable device which supports VCP over USB)

It does it with "full error checking" (often neglected) in code I've come across, so far.
I'm of the opinion, that this is required for "easy debugging", especially for beginners.

As a first example a test with a Arduino, that does "nothing" except acting as a
"loopback device". Whatever sent is instantly returned to the "sender".

Note:
from FB one can send a String, but the Arduino is returning single characters,
until the string is done ... (the way the Arduino Sketch is implemented)

Not a bad start. Main feature, I think: Serial_RX() waits for some response (maybe not full response) and times out otherwise.

As for speed, PUT vs PRINT, or GET vs INPUT(), I don't know; processing multiple bytes at once will be faster, which all these fbc statements can do. At 9600 baud it probably won't matter even if were doing 1 byte at a time, as we are only moving approx 1 byte per millisecond. At the higher communication speeds, might start to notice a difference by processing multiple bytes at once. Anyway, having the throughput in mind is a nice addition.

Serial_RX() can exit without receiving the full message, which is more likely the if the device sends longer messages. Also, Serial_RX() could return a valid message or an error code in the same result, so device can never send a message that is equal to Serial_RX()'s error code message. For consistency with Serial_TX() and Serial_Close(), maybe Serial_RX() could also return boolean = FALSE for success, and pass a string parameter to Serial_RX() instead as the receive buffer.
Top

It seems to be doing what mine did? Returns the previous input rather than the current input? 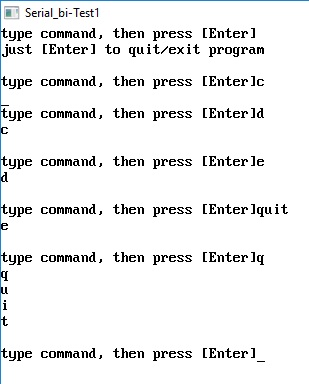 BasicCoder2 wrote:It seems to be doing what mine did? Returns the previous input rather than the current input?

Nope, not on my systems. Everything is A-OK.

Otherwise: try to increase timeout setting, until you're getting a decent result ...
(that's the reason to have it, in the first place)
Top

USB is a differential signal +D -D and and well shielded.

If this are true in your setup then you have (1) a bad cable (2) or your serial to USB adapter has a power=voltage problem !

(3) Don't wiggle the cable like a snake (or a ordinary coil) this will produce signal reflections and interference's !

I have different DSO's (digital signal oscilloscopes from 20Mhz to 100MHz)
running with FreeBASIC to capture signals over cheap chinese serial to USB converters without any problems.

BasicCoder2 wrote:It seems to be doing what mine did? Returns the previous input rather than the current input?

Yes, I noticed that too. It happens if there is anything in the fbc host comm buffer before the first Serial_TX() call. For example, I used a different sketch and had a Serial.Print() in Setup(), which got the synchronization off track right from the start.

It's like this:
1) We are waiting at fbc's INPUT statement, but for some reason, there's already some data in the COM buffer waiting to be read.
2) We enter the command and hit ENTER
3) Serial_TX() sends the data, and it's on its way to the device
4) Serial_RX() gets called and sees right away there is already something to read (which was there from before).
5) Serial_RX() reads out the data before there's time for the latest command (you just entered) to be answered by the device.
6) Whatever was in the COM buffer gets printed.
7) And we loop back around to the INPUT statement.
8) By this time, we've probably got the response from the device and the answer is sitting in the COM buffer.

So, the only way this scheme can work, is if the device never sends data unless it is asked to, and always responds completely before the timeout value.
Top

This appears to be a good practice. For some boards, while(!Serial) always returns true, so doesn't matter, but I guess it doesn't hurt to have it in there either.

I was hoping this would solve a problem I had on Linux where I was getting bad data coming from Serial.Print() in setup(), but it has no effect on Arduino UNO. Turns out that the board was getting reset twice when opening the COM port from fbc, but not always, and very quickly. It might be that I am running Linux in a VM. A clunky fix for me was to add a delay(1000) in setup() before sending anything to the Serial.print(), just in case it got reset (twice).
Top

There may also exist a certain amount of differences, depending on the model
of Arduino used. Mine is a "old" Duemillanove/Diecimilla: ATMEGA 168/16 MHz.

There seems to be a misunderstanding: I don't have problems, BasicCoder2 has them.
Secondly I'm definitely all for "high quality cables" (for any type of connection).
Thirdly I don't use any sort of converter, USB-A to USB-B cable.
Top
Post Reply
9 posts • Page 1 of 1

Users browsing this forum: No registered users and 2 guests